Folks were quite excited to hear the news that Moonspank was reuniting for a triumphant return. It wasn’t too long ago that I had the opportunity to play bass with the band at a one-off private party for family and friends. This show, however, had the potential to be the full-on rock extravaganza it was in the old days. 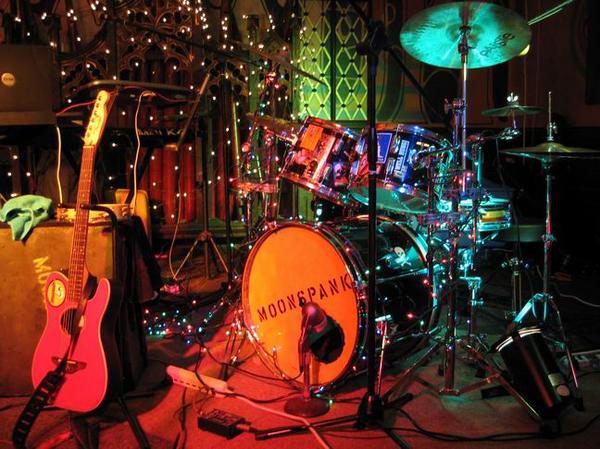 People trekked from all parts of the tri-state area to assemble at the Castle Bar & Grill in Stamford. Some of those people shelled out their hard-earned cash for a babysitter just so they wouldn’t miss a single lyric sung through Dave’s heavy, Irish brogue.

Just hours before call time, I decided that I was so excited to capture the show that I frantically started packing up my Pro Tools rig, laptop, and every microphone, cable, and adapter that wasn’t hard-wired in my home studio. I was ready!

Just two days earlier, I got together with the boys for what was to be our one-and-only rehearsal for the show. It only took a few minutes to shake the dust off. We ripped through a spectacular setlist of Moonspank classic covers and originals.

With my car loaded with more equipment than a mom-and-pop music shop, I left my house with ample time to make the drive across state lines and set up a very complicated rig consisting of a MIDI controller, 2 laptops, a Pro Tools I/O system, an ADAT bridge, optical cables, various softsynths, a volume pedal, a sustain pedal, an amplifier, headphones, numerous patch cables, microphones, stands, an external hard drive and power supply, FireWire cables, extension cords, power strips, and a growing sense of panic knowing that I would not only have to set it all up properly, test it, play (most of) the right notes in (relatively) the right time, but then also I would have to tear it all down and load it all back into the car.

Five minutes into the trip I received a disconcerting text message. The word “clusterfuck” was used to describe the impending situation. I’ve had gigs cancelled on me at the zero-hour due to a double-booking, but this news took the cake. A triple-booking? Two completely separate parties were booked in the same venue– neither of which seemed to be open to the idea of a very loud and energetic rock band dominating the aural landscape. After some brief negotiations, it was decided that the show was not going to happen.

The show must go on! I had an idea. “Lets go on Yelp, locate every decent venue in a 10-mile radius and ask them if they wouldn’t mind taking on a free live band and 30-40 heavy drinkers.” The band and the fans agreed upon this excellent plan… the best laid plans of Moonspank and men.

We knocked, we asked, we offered, we pleaded, we really tried… then we went home… without playing a single note.

Needless to say, endless thank-yous to those of you who showed up to the venue this past Saturday. The circumstances were unforeseeable, albeit seemingly directly out of a scene from This Is Spinal Tap. To that special group, we will be planning a Mea Culpa of sorts. This isn’t the last you’ll hear of Moonspank! Stay tuned…