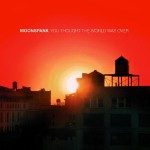 I had a great time working on this album with the boys. I contributed some Wurlitzer, Rhodes, and B3 organ parts to a few of the tunes, and took on the mastering duties. You Thought The World Was Over is packed to the brim with pop, rock, and even a bossa nova venture. It also features an updated ‘pop’ remix of the well-received tune, “Alright,” originally recorded for their 2003 release, Just Another Day.

“You thought the world was over, but we’ll stand the test of time…” –Moonspank