Jake Wins 1st Place at the 2018 Battle Of The Firehouse Bands! 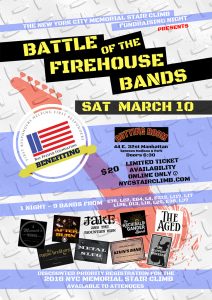 The 2018 Battle Of The Firehouse Bands was held on March 10th as a fundraiser to kick off the 4th Annual New York City Memorial Stair Climb event which will be held on July 1, 2018 at WTC3. Jake And The Mountain Men tossed their name into the hat along with eight other FDNY bands for a chance to win a $1,000 cash prize and to help raise awareness for the Ray Pfeifer Foundation, a non-profit organization dedicated to assisting 9/11 first-responders, firefighters and police, with medical needs not covered by insurance.

Jake’s bassist, vocalist, and member of the band since its conception, Scott Hickey, personally worked with and was friends with Ray Pfeifer, and represents FDNY Engine 54, Ladder 4, Battalion 9, the hardest-hit firehouse on 9/11. Scott and the band were eager to jump on the opportunity to support a great cause and have a blast while doing it. The show was held at New York City’s infamous Cutting Room, with all ticket sale profits going to the aforementioned charitable foundations.

Each band had just 10 minutes to show off their goods. With a massive selection of cover songs in their bag, Jake decided the best way to showcase their talents would be in the form of a medley of their ‘most kickass’ tunes, followed by The Who’s “Baba O’Riley” which showcases Mussels’ incredible vocal skills, Brendan’s wild guitar windmills, Scott and Dino weaving tight rhythmic undertones, all being held together by Monith’s precise, explosive-yet-musical drumming.

Just before the venue doors were opened to the public, the order of the bands was drawn out of a hat with Jake pulling the opening spot in the lineup. While this gave the group a slight advantage, providing extra time for set-up and sound check, the guys feared that the crowd would forget about their performance after 90+ minutes of seven other bands of a multitude of genres giving it their best.

Luckily, the response was quite the opposite.

When it came time to vote, there was overheard chatter of “what was the name of that first band?” in the room. Present friends and family certainly did their part, but the general public had the final say and Jake ended up solidifying first place.

Jake were announced as the winners and were called up to perform an encore. With the show running ahead of schedule, the band was able to perform five encores. With no formalized ideas in mind, the band democratically decided on the fly to perform Steely Dan’s “Peg”, Tommy Tutone’s “867-5309/Jenny”, Rick Springfield’s “Jessie’s Girl”, “Laid” by James, and the previously-teased “Everybody Wants to Rule the World” by Tears For Fears.

When the winner’s check of $1,000 was handed over, Mussels suggested donating the money right back to the charity. The band unanimously agreed that this was the best way to spend the winnings; to honor the fallen and the brave first-responders who are still battling their illnesses nearly 17 years later.

We did it! Jake took first place at the 2018 Battle of the Firehouse Bands and donated their winnings to the Ray Pfeifer Foundation. Thanks to everyone who voted!

Jake And The Mountain Men would like to send a huge thank you to those of you who supported us and this fantastic cause. There were some absolutely fantastic performances by the bands including After Burn, The Archibald Gander Band, The Aged, Kevin’s Band, Metal Slug, The Russo Brothers, and The Slippery Chickens. We couldn’t have been more proud to have shared the stage with all of the amazing and humble musicians that night.

Be sure to check out Jake And The Mountain Men’s Live Schedule for upcoming Jake shows, and also stop by the Bootlegs archive to download some full-length live shows. Looking to book Jake for a private party or a public event? Don’t hesitate, click here!

Jake loves you all!