So I leave work yesterday like any other day- half-asleep; my thoughts clouded in a dense fog from a normal day at work. I was heading from Times Square towards Grand Central Terminal, a 10-minute walk on 43rd Street. At some point between 6th Ave and Madison I notice a woman walking swiftly towards me, having a conversation on her cell phone while crying. I thought to myself, “Oh that sucks, something horrible must have happened to her.” It’s not the first time I’ve seen something like that in the city and that’s my usual reaction.No sooner did I finish that thought then a crowd of about 20-50 people frantically ran towards me- some of them crying, most of them on their cell phones. I was beginning to think that something horrible did happen.

After I passed that crowd another, much larger, group of people were quickly making their way in my direction. I noticed that more and more of them were crying, some of them hysterical. I overheard someone say, “We gotta get out of the city, NOW!” When I asked someone what was going on, one of the women responded through her tears, “A bomb just went off on the 4-5-6 line!”

I turned my cell phone on and tried to call my wife to let her know that I was OK. The call wouldn’t go through. I tried a few more times and settled for a text message that simply said, “I’m fine!!” I thought if a bomb had just gone off, they might not have yet stopped the Metro North trains running out of Grand Central and I could hop on one of them and make my escape. I walked towards Grand Central, and unfortunately saw a sight that looked all-to-familiar. It wasn’t much unlike this photo: 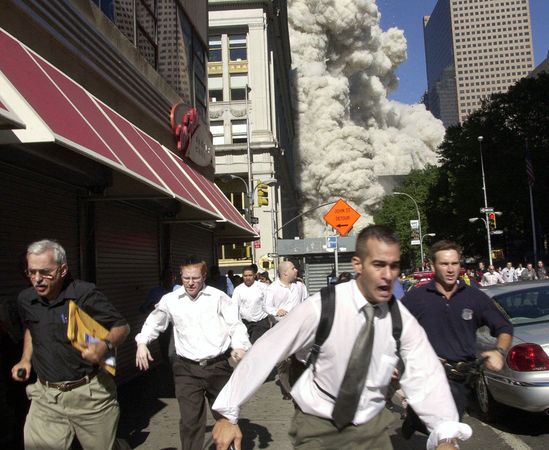 The Chrysler building was mostly shrouded in a white cloud that was billowing up from 41st St, people were running with terrified looks on their faces, women’s’ high-heel shoes strewn about in the street in an attempt to make a quick escape…

At this point I was between Madison and Park Aves, inches from Grand Central. The street, the cars and storefronts had a layer of dust and mud on them, another all-too-familiar site. A Police Officer was directing people away saying, “Grand Central has been evacuated- LET’S GO PEOPLE, MOVE AWAY!”

At this point my wife got through to me and I said “STAY ON THE PHONE WITH ME NO MATTER WHAT.” My half-asleep fog was replaced by fight-or-flight response. I explained the situation to my wife asked her to turn on 1010 WINS (a 24-hour AM news station in New York). The news hadn’t broken yet; there was no information.

I had already begun walking uptown- the idea being that I could catch a cab to 125th street or literally walk the 40 miles home. Within a few minutes the radio was covering the story. The original explanation was that some underground electrical transformers had blown. That was enough to breath a huge sigh of relief. This was the first time, in what felt like hours, that I thought, “It’s not a terrorist attack.”

My adrenaline got me to 80th Street; I bought a huge bottle of water and continued walking to 125th. It’s about a 4 1/2 mile walk and it was a hot summer day. I was pretty well drenched with sweat by the time I got to the train station in Harlem. That was the busiest I’ve ever seen that station. I saw some familiar faces there. Most people cabbed it or took the subway there from Grand Central. I had learned that the Grand Central Northway Passage was open and that trains were running again. Within a few minutes I was able to hop on my train and head home. 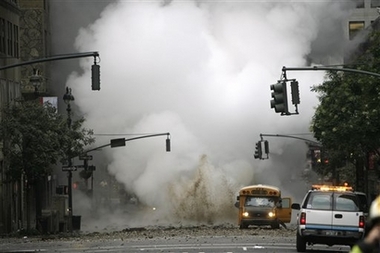 Here is what happened: An 83-year-old, cast iron steam pipe ruptured on 41st St and Lexington Ave. It caused a huge explosion of 400°F steam and a huge crater which swallowed a tow truck. A 57-year-old woman died of a heart attack while fleeing and at least 44 people were injured. Two people were critically injured, scalded by the steam. This was not just an explosion, but more like a volcanic eruption as once the pipe burst the steam did not stop until feeding valves were manually shut by Con-Edison. It is still unknown how much asbestos was in the air immediately after the explosion, but as of today there hasn’t been any found other than in the debris and dust around the area.